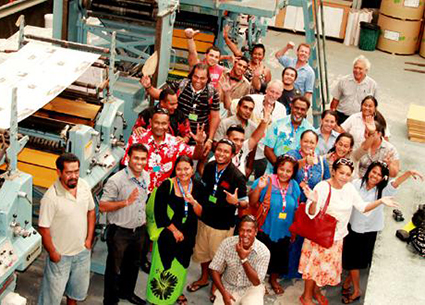 Samoa’s Media Council law, passed by Parliament earlier this year, will come into effect as soon as Prime Minister Tuilaepa Aiono Sailele Malielegaoi formally endorses it. While some journalists and media commentators say there is a need for such a regulatory body for the Samoan media, others say the government’s involvement puts a strain on freedom of the press, reports Asia-Pacific Journalism.

Now that the Samoan government has passed the Media Council legislation what does it mean for the media in Samoa, where freedom of the press has come under fire many times in past years?

“There were a number of in-depth consultations that were held by government and the Journalists Association of (Western) Samoa (JAWS) over the course of three years.”

Rivers says that what should be highlighted is that the Media Council will be “media-led”.

“The Journalists Association of (Western) Samoa, or JAWS, is comprised of journalists and they will choose the council members from among themselves and the community. This is important for journalists/media in Samoa as they will ultimately determine the quality of reporting in the country.”

The largest newspaper group, and the only daily newspaper in Samoa, the Samoa Observer, doesn’t believe this is the case. Stating that their position is simple: they’ll support a Media Council if the government is not involved.

“If it is one set up by the government, which in this case it is, we will not have anything to do with it,” says editor Mata’afa Keni Lesa.

“I’m also mindful that there are many people who don’t like our work and will look to exploit the existence of the Media Council to agitate and deny media freedom. If we needed to be careful before, we now need to be extra careful.”

Regulation needed
The draft Media Council Bill 2014, which was circulated to members of the media last year, was reported to be set up to investigate public complaints as well as introduce a Code of Practice and Code of Ethics.

Misa Vicky Lepou, a member of JAWS and a lecturer at the National University of Samoa, says the Media Council being set up was in terms of the need for a regulatory body to help set guidelines for the media in Samoa on a professional level.

“It has been a long-standing project of more than 10 years. This will also give the national association a legal entity status and become a stronger institution that would assist all media in Samoa.”

Contributing editor to Pacific Media Watch, Alistar Kata, who was on internship in Samoa last month working alongside the local media when the legislation was passed, says there was definitely a place for a set of standards. However, she was also aware of possible consequences or downsides.

“Some of the journalists I spoke to were a bit tentative or didn’t really agree with what was happening because there could be a gagging effect, or the penalties for journalists speaking out of turn may be too harsh.”

“If it’s a government initiative to bring in this legislation, and I think there are major concerns, and that’s why the Samoa Observer is not subscribing to it. So any self-regulatory or legislative process that is going to be resisted by the news media such as the Observer is going to mean a mockery of it really. ”

The problem, Dr Robie says, is Samoa’s form of government. The Human Rights Protection Party (HRPP) has been in power since 1982, apart from a brief period in 1985 – 33 years.

When a party is in power for too long it paves the way for possible abuse of power.

“However, under this new law they’re removing criminal defamation. So that’s a good step, at least there are some improvements. But I think the media’s going to have to be very vigilant about this law and see how it’s going to work out.”

The government has two media outlets, Radio 2AP and the Savali newspaper, and the Opposition Party – Tautua – also has a newspaper called Tautua Lelei. However, the majority of Samoa’s media industry is private, which includes the Samoa Observer, which has been a bastion of press freedom since its establishment in 1978.

Striking a balance
The media and the government will need to find a balance, says Dr Robie.

There needs to be checks and balances for the media, he says. While it is the watchdog for the wider society, the media itself does need some form of accountability.

He points out that many countries have media regulatory models that while being set up by government maintain independence from state control – for example, in New Zealand while newspapers are accountable to the self-regulatory Press Council, broadcast media answer to the government-established Broadcasting Standards Authority.

A NZ Law Commission recommendation in 2013 for a one-stop independent media complaints body serving print, broadcast and online media – and even bloggers – through a News Media Standards Authority was ultimately rejected.

“We’ve got to be very careful about when we’re talking about media freedom in Samoa,” Dr Robie said.

“On one hand you’ve got the government trying to impose potentially an unfair law, which may perpetuate some of the problems in Samoa, on the other hand you’ve got resistance that’s basically a media saying, ‘we do no wrong, we need to fight for media freedom’” but go about some things in an unprofessional manner.

“We don’t want the government interfering in the business of the media on one hand, but on the other the media do need to raise their professional standards.”

Mata Lauano is a student journalist at AUT University on the Asia-Pacific Journalism Studies paper. She is completing a Postgraduate Diploma in Communications (Journalism).