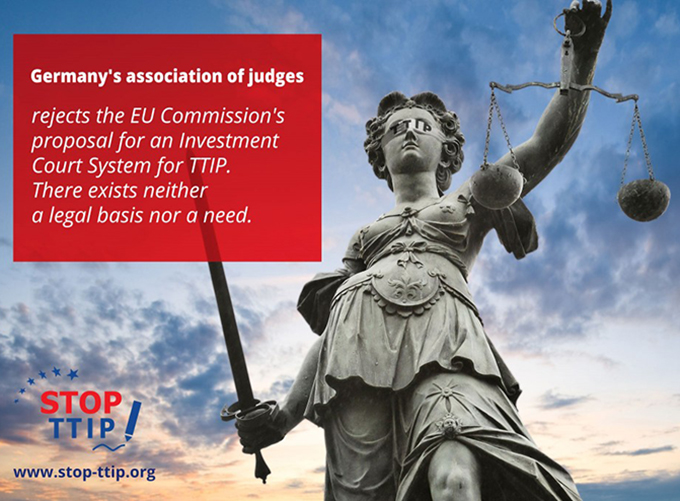 In a statement, Germany’s largest association of judges and public prosecutors has firmly rejected the European Commission’s  proposal to create an investment court  system in TTIP – the European equivalent to TPPA being signed today in Auckland.

By Felix Heilmann and Friederike Rehn

After unprecedented controversy over far-reaching rights for foreign investors in the proposed European Union-United States trade deal TTIP – also known as Investor-State-Dispute-Settlement or ISDS – the European Commission had presented a revised proposal for the issue in autumn 2015, allegedly replacing the much-loathed ISDS with an “Investment Court System”, or ICS.

The proposal drew heavy criticism from civil society groups rejecting the Commission proposal as a mere re-branding exercise, which would resolve none of the fundamental concerns about granting special privileges for foreign investors, undermining national laws and bypassing domestic courts.

The latest statement released by Germany’s largest professional association of judges and public prosecutors echoes these voices and presents a heavy blow to the Commission.

In today’s statement the judges and prosecutors call “special courts” for only one group in society “the wrong way” to ensure legal certainty and security. They also raise serious concerns over the independence of the judges in the Commission proposal, ranging from lack of financial independence to unclear selection criteria.

According to the statement, “this makes the ICS not look like an international court, but more like a permanent arbitration tribunal.”

The paper also stresses that there is no need for the establishment of a special court for foreign investors as EU member states provide and guarantee equal access to justice to all litigants, including investors.

Now that citizens’ concerns have been confirmed the question remains: If legal professionals and citizens reject this idea, whom is the Commission actually serving, if not corporate interests?

TPPA ‘out of step with human rights’