A Fiji Diary: Reminiscences and Reflections of a Newsman is a selection of revised and updated writings by Vijendra Kumar, a former editor of The Fiji Times, compiled into an engaging and highly readable book.

The 13 sections and 100-odd pages combine Kumar’s personal experiences and journalistic views to provide unique insights into some major events that shook Fiji, and shaped its future. 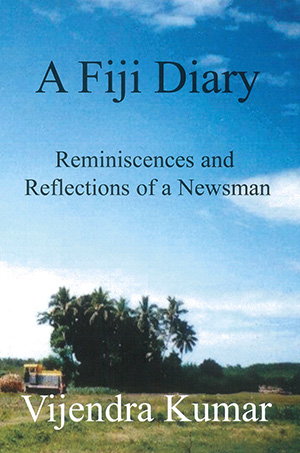 The portrayal is enriched by anecdotes of Kumar’s encounters with some important personalities who, for better or worse, influenced the country’s destiny. Fiji’s founding Prime Minister Ratu Sir Kamisese Mara features quite heavily. Competing with him for space is Sitiveni Rabuka of the 1987 coup notoriety.

At the narrative’s heart are the vivid accounts of Kumar’s remarkable life story while growing up in Nadi. What emerges is a fascinating portrait of the simplicities as well as the complexities of a life lived in Fiji — a depiction many Fijians would readily identify with.

When he plucked up the courage to ask for his pay, Kumar was shown the empty office till. On a lucky week, he received $25. This saw Kumar take up high school teaching, a job he stuck with for 12 years, before returning to his true calling as a reporter, but this time at The Fiji Times, in 1969.

Within six years, Kumar had become the first local editor at the iconic national daily, up till then largely an expatriate stronghold. His resignation in 1991 and subsequent migration to Australia was a consequence of Fiji’s first coup in 1987. Kumar dwells on the coup at length, which is hardly surprising, since the coup’s impact was not just stunning, but also enduring.

Trauma felt deeply
The trauma was felt deeply, both at the national and personal levels.

During his time in Australia, Kumar served as a subeditor at the Courier Mail in Brisbane, before retiring in 2001. It was a remarkable journey for a descendent of Indian indentured labourers; one who left home at the tender age of six to live with his aunt to gain access to better education.

Kumar’s insights matter: As the editor of The Fiji Times, he was at the vantage of major developments in the country’s history, observing them unfold, interpreting them, and reporting their impacts nationally. In the first chapter, “Goodbye to Paradise”, it’s apparent that even a newspaperman like him was taken in by Fiji’s relative post-independence calm.

The mirage was shattered by Rabuka’s nationalist coup. In Kumar’s view, the coup turned Fiji into a “purgatory for half its people”.

The post-coup media crackdown created a precarious environment for journalists. Kumar writes that the editorship was always a “hot seat”, but after the coup the “heat became almost unbearable”. After four years of “harassment, intimidation and outright threats, he felt that he could no longer discharge his professional duties with ‘honestly and without fear’.”

Kumar expresses disappointments and regrets without rancour. His measured analysis demonstrates an astute knowledge of Fiji politics and a deep respect for Fijian culture. “The Fall of a Titan” was his tribute to Ratu Mara after his death in April 2004.

Kumar notes that the Rabuka coups not only signalled the death of democracy, but also the fall of a titan in Ratu Mara, who hastened his own demise by failing first to condemn the coup, and then, by leading the post-coup regime.

Coups replete with irony
Coups are by nature replete with irony. Mara was accused of being behind the very coup that, in the eyes of many, tarnished his record. The suspicions were fuelled by none other than a brooding Rabuka, who said he felt used and betrayed by the coup’s unseen power-brokers.

In Kumar’s view, Ratu Mara “dedicated his life to his country” and will be “kindly judged by history. The Pacific Island states have produced no greater son,” he writes. But Ratu Mara critics, who accuse him of a litany of sins — ranging from racism to corruption, and crony capitalism to political opportunism — would strongly disagree with Kumar.

Like many a leader, Ratu Mara was a controversial figure. The team of reporters that Kumar headed did not spare Mara, even though Kumar had gotten to know him personally. If Kumar’s portrayal in the book sounds forgiving, it’s probably because of hindsight and reflection.

His evaluation possibly stems from a more holistic analysis of Ratu Mara’s record, and a healthier appreciation of human frailties. Even Gandhi, the “Mahatma” or “great soul” is said to have had skeletons in his closet.

Ratu Mara tried to be a political centrist, and if he failed, the fault wasn’t his alone. The middle ground in an ethnically-divided country like Fiji is a precariously fine line. It’s a slippery slope that has claimed quite a few political scalps, such as the doomed multi-racial coalition headed by opposition leader Jai Ram Reddy and Prime Minister Rabuka in 1999. Rabuka’s fall in particular added to the ironies of the 1987 coup.

Kumar highlights a number of such political absurdities. His soft side surfaces in his tribute to the late Irene Jai Narayan. The fiery Narayan was shunned by her National Federation Party electorate after she crossed the floor to join Ratu Mara’s Alliance Party in 1987.

Kumar not only dissects Narayan’s defection, but he also highlights her distinguished service to the country. “She lit a spark among women,” he states.

Fiji academic, Professor Satendra Nandan pins down Kumar’s style best in the book’s foreword: Kumar “provides a balanced picture with a rare generosity of mind, but often with sharp and discriminating insights”.

Highly-regarded editor
This attitude explains why Kumar was a highly-regarded newspaper editor, even in the face of growing scepticism about the ethics of a market-driven media, increasingly locked in fierce ratings and circulation wars.

Academics like McNair and Fallow have drawn attention to the emergence of an increasingly aggressive form of journalism that has given rise to a “decline of deference”, with political leaders considered prized targets. This trend marks a wide paradigm shift in political reporting — from “healthy scepticism” and an “independent, adversarial relationship with politics”, to a “corrosively cynical and hyper-adversarial” posture.

Media researcher Spiess calls it “attack dog journalism” — an aggressive reporting strain that goes beyond the watchdog role and harms “fledgling democracies” by “nurturing intolerance and diminishing faith” in leaders.

In Fiji, sound and mature editorial judgments are crucial for public trust and confidence, especially in crisis situations. In this respect, it’s likely that Kumar’s clear-thinking and foresightedness helped steer The Fiji Times through the dangerous 1987 coup waters without sinking into oblivion.

The second coup in September 1987 forced the paper’s closure for seven weeks. It reopened after direct representations to Rabuka, who only asked that the paper not publish “inflammatory” material. Regrettably, Fiji’s second national newspaper, the Fiji Sun, which had also bravely criticised Rabuka’s actions, closed for good after the first coup.

While forced out of Fiji by circumstances, Kumar, like many exiles, is still emotionally attached to the country. His multicultural outlook is reflected in his qualified support for Voreqe Bainimarama’s 2006 coup. In “The Rise of a Reformer”, first published in 2012, Kumar sees Prime Minister Bainimarama’s mission as reforming a flawed, racially-based political system and building a stronger democracy.

Overall, Kumar’s disdain of a coup culture is evident. He writes: “Although coup-makers’ corpses eventually end up rotting on the dung heap of history, the countries experiencing such dislocation continue to wallow in a social, economic and political quagmire for a long time.”

Kumar then poses a poignant question: “Can Fiji go against the tide of history?” That is no doubt the silent prayer of many a coup-jaded Fijian.

Dr Shailendra Singh was a journalist at The Fiji Times from 1989 to 1996. He is now the senior lecturer and coordinator of the USP Journalism Programme.